skip to main | skip to sidebar

Admirable persistence in the face of adversity

Help a bald brother out

If you are feeling the pinch, I suggest saving petrol by taking advantage of hamster power.

Harness the natural zest, enthusiasm and love of life of hamsters by placing them inside your car tyres. This will take advantage of the 'hamster wheel effect' and add a natural, renewable source of power to your car.

Note that food for the hamsters would need to be fed through the air valve.

Quote of the day

"There is no such thing as fun for the whole family"

Jerry Seinfeld
Posted by Rob at 22:52 No comments:

The Olympics: why I am uneasy

And yet, and yet. I don't know how to respond to the fact that this Olympics is being held in China.

Amnesty International's monitoring involves four main areas: repression of activists, detention without trial, censorship and the death penalty.
Each of these areas give cause for concern.

This of course is without mentioning China's actions in Tibet. AI's last report says "The recent protests in Tibet and Tibetan-populated areas of surrounding provinces and the subsequent crackdown and media silence imposed by authorities highlighted not only longstanding and unresolved violations of fundamental human rights but also on-going censorship of the media."

Today, as the ceremony proceeds, there are people being tortured by the state because of what they believe or say. At least one person will be executed for one of 68 crimes punishable by death.

I am not sure how to react, but I do think there is something in the 'shining a light on the issue' viewpoint. The more we open a society to outside influence, the more we understand and the closer we come to change. It's understanding that brings change.

But this doesn't leave me feeling anything other than uneasy.

One Olympics, one world, one party state. 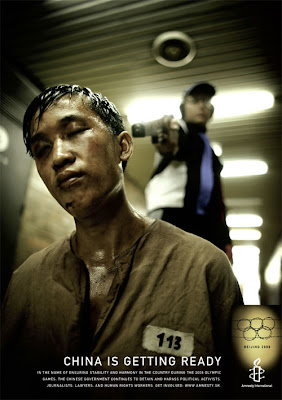 The Olympics: why I care

I have never really got into the Olympics before now. I am not sure why, because I love sport. It's possibly because I've never played any of the sports except hockey, and I suppose running. Though my running can hardly be described as running running.

But now I've changed, and I'm excited about these Olympics. I think this is a natural result of several factors, not least that as you get older your circle of interest expands, from self, to community to world. Though there's also possibly a London effect happening - I can't wait for the world's attention to focus on London.

I am also more of an observer of sport now, rather than a participant. I have finally realised that I am no longer going to be a world class sportsman, which is something that crept up on me only gradually. (Is it too late? Even for shooting?) So, I am free to enjoy sport for the story it tells about the world, rather than the story it tells about me.

Next, I believe in the power of sport. It certainly saved and enhanced my life. I think it's essential for human development to experience sport, or at least exercise, and I see it as key to unlocking the broken lives of some of our young men, in particular.

And I also believe in sport as a great unifier. I doubt there is anything that has done more to combat racism in the world than sport. Certainly, in Britain football's contribution to tackling racism can't be underestimated. We've come a long way since John Barnes was pelted with bananas. And it was Barnes' reaction to the pelting that started the journey. The experience of South Africa adds to the argument. And so, yes, I suppose I am arguing there is something about the Olympic spirit and that sport can be used to mend lives, societies and even international relations.

But perhaps above all, the Olympics is interesting because of the stories that it produces. At the last Olympics, there was 0.545 seconds worth of difference between five Gold and Silver medals for Britain. Half a second between 5! That's a lifetime of effort and 4 years of dreaming, boiled down to about a tenth of a second each. Inevitably, this leads to astonishing stories and if anyone doubts the power of these stories they should read The Meaning of Sport by Simon Barnes, the greatest of all sporting storytellers, or follow his blog.

Cricket, like baseball, is a game of percentages, statistics and risk. Test match cricket is the ultimate sporting experiment. Is the effect when one side is batting and the other bowling reversed when the roles are reversed?

Over two innings and five days, the best side usually wins. The reason why Test Match cricket is the greatest of all games is because of the character, skill and intelligence that it calls upon each of the players to display.

Today was a great example. Kevin Pieterson, who is the most talented batsman in the world, was beginning to turn the match around for England, who've been in deep trouble for the whole game. Another hour or two from Pieterson and England would have been favourites to win. Pieterson went for glory - a 6 to bring up his hundred - and got out. Earlier, Ian Bell had given his wicket away to the first ball of a new spell by Makhaya Ntini.

The reason this is significant is that both incidents will contribute to England losing the game - it was high stakes. And second, both could have been avoided by a calm assessment of what was worth a risk and what wasn't. This may sound obvious, but I would provide England with the following statistics:

1. How many deliveries into a new spell does the risk of playing an attacking shot diminish?
2. Which shots carry the highest risk and against which bowlers?
3. How many deliveries after an interval does the risk of getting out diminish?
4. Who has the best strike rate (balls per wicket taken) and who has the lowest in the opposition bowling? The idea would be to attack those with the lowest and defend against those with the highest.
5. In-match updates of risk factors.
6. Risk analysis of near misses, especially to provide 5.
7. Regression analysis on the factors which go into scoring a century (i.e. caution after an interval, against a new ball bowler, against the best bowlers)
8. Average levels of (composite) risk taken per ball to score a century.

I am convined that if a risk mindset could be established as part of a batsman's thinking, results would rapidly follow.
Posted by Rob at 20:00 No comments:

Rob
"If everything I've ever done is wrong, the opposite must be right".

Other things what are good